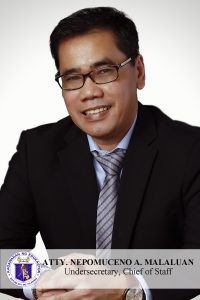 Atty. Nepomuceno A. Malaluan is Undersecretary and Chief of Staff of the Office of the Secretary.

Before joining DepEd, he was corporate secretary and trustee of Action for Economic Reforms (AER), a policy analysis and research organization working on macroeconomic and governance issues, which he co-founded in 1996. At AER, he was involved in policy work on water, electricity, industrial policy, and other development concerns. His written work in these areas have been published as book chapters, monographs, and newspaper columns and articles.

He was also involved in public campaigning and advocacy. He was co-convener of the Right to Know. Right Now! Coalition (R2KRN), a campaign network working for the passage of the Freedom of Information (FOI) Act, which has grown to involve more than 100 organizations coming from media, the academe, the church, labor, business, and civil society organizations.

As  a lawyer, he extended legal support and representation to his various organizations, as well as to select public interest advocacies.

At present, he represents the Department in the Cabinet Assistance System (CAS), the inter-agency support unit of the Cabinet where cabinet directives are coordinated. His office implements, in coordination with various offices of the Department, the special assignments of the Secretary as well as CAS directives to DepEd. His office also monitors the implementation of the top priorities of the Secretary, and provides supplemental initiatives to ongoing programs.

He graduated with a BS Economics degree at the University of the Philippines, Diliman in 1994, where he won 2nd place, Gerardo Sicat Award for Best Undergraduate Papers. He obtained his Bachelor of Laws at the same University in 2001, and was admitted to the Philippine Bar in 2002.