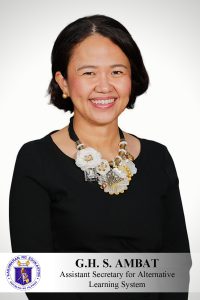 Assistant Secretary G.H. Ambat serves as the lead Executive Committee official in strengthening and expanding the implementation of the Alternative Learning System (ALS) Program nationwide since 2016.

Under ASec. Ambat’s leadership, innovations and reforms were introduced to “level-up” ALS, resulting in 4.2 million out of school youth and adults given access to quality second chance education. The said enrollment figure between 2016 and 2021 is higher by one million compared to the two previous administrations.

With ASec. Ambat at its helm, the ALS K to 12 Basic Education Curriculum (BEC) was finalized and implemented, the five-year ALS 2.0 Strategic Roadmap was rolled out, and Republic Act No. 11510 (ALS Act) and its IRR were passed and approved. Under the ALS 2.0, life skills and work readiness lessons were integrated in the enhanced ALS K to 12 BEC, learning resources were updated, and the conduct of a quality capacity building program for ALS teachers became systematic.

Her work in ALS has gained the support of development partners such as the United States Agency for International Aid (USAID), World Bank, Asian Development Bank, United Nations Children’s Fund (UNICEF), United Nations Educational, Scientific and Cultural Organization (UNESCO) and Korea International Cooperation Agency (KOICA). She serves as the focal point responsible for delivering the Philippine progress report to inform the fifth Global Report on Adult Learning and Education (GRALE 5) and is a governing board member of the Southeast Asian Ministers of Education Organization (SEAMEO) Center for Lifelong Learning (SEAMEO CELLL). She is also a member of the Gender Reference Flagship of the Covid19 Global Education Coalition which provides advise to address the gender dimensions of the COVID-19 school crisis and safeguard progress made on gender equality on education in recent decades.

Under ASec. Ambat’s management from 2016 to 2019, the Public Affairs Service (PAS) of DepEd significantly improved its protocols and guidelines, communication strategy, content development, media relations, public assistance, and creative and technical assistance to effectively and efficiently deliver the Department’s mandates and accomplishments to its various stakeholders through traditional and new media. The said strategies resulted in DepEd having the most number of followers in all social media accounts among all government agencies by end of 2019. ASec. Ambat likewise gave her full support to empowering Regional and Division officials and information officers in strategic communications and crisis management through a series of seminar-workshops by specialists in the industry and in the government. PAS was also able to roll out the first DepEd Manual of Style (DMoS) and the first DepEd Service Marks and Visual Identity Manual (DMSVIM) during ASec. Ambat’s term.

ASec. Ambat spent her initial years of public service in the Legislative Branch of government. Prior to her appointment at DepEd, she served as a policy specialist and agenda manager for the Senate Committees chaired by then Senator Teofisto “TG” Guingona III from 2013 to 2016. She also worked as a social development specialist at the Senate Economic Planning Office (SEPO) and a legislative staff of former Senator Manny Villar years prior. Her substantial background in discourses on social development, public policy and governance, along with her experiences in management of donor-funded projects and advocacy, prove to be significant in her role as the first Assistant Secretary for ALS.

ASec. Ambat obtained her Bachelor’s Degree in Journalism and Master’s Degree in Public Administration from the University of the Philippines Diliman.