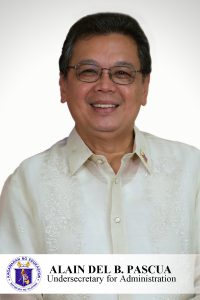 Alain Pascua is a proud product of public elementary education, having studied in Gerona North Central School in Tarlac. Raised by academicians, both his parents were public school teachers, who spent all their working years teaching in various public schools until their retirement. He then went to Mary Help of Christians Seminary in Binmaley, Pangasinan, where he studied classic secondary education.

He spent his college days at Adamson University in Manila at the time when student activism was on the rise after the lifting of Martial Law. He was the first president of the Adamson University Student Government ever elected for two consecutive terms. During that time, he founded the National Association of Student Councils of the Philippines or NASCOP, and represented the country at the World Youth Congress in Moscow, at the former Union of Soviet Socialist Republics or USSR. When he finished his Civil Engineering degree, he was awarded by the Vincentian Fathers with the Presidential Medallion and Campus and Community Leadership awards.

He has served government in different capacities — as Executive Assistant in the Employees Compensation Commission, as Assistant Secretary of the National Anti-Poverty Commission or NAPC, and as Chief Political Affairs Officer of Senator Ping Lacson. He has also served as political consultant to many elected government officials.

Amidst his busy schedule, he finds time to pursue his passion and advance his advocacy for the environment.Unknown to many, he is one of the leading and best wild bird photographers of the country. With international following, his outstanding photographs have graced the pages of several books and publications and decorated walls of offices, homes and hotels. He co-founded the Wild Bird Photographers of the Philippines (WBPP) in 2012. InApril 2017, he launched his coffee table book Haring Ibon – The Great Philippine Eagle, the first book to focus solely on the critically endangered Philippine Eagle. On September 2020, Spain-based Lynx Edicions published the historic first All the Birds of the World with his iconic photograph of the Philippine Eagle on its front cover.

Education Secretary Leonor Magtolis Briones was his teacher when he took up Masteral studies in public administration at the National College of Public Administration and Governance (NCPAG) at the University of the Philippines. Professor Briones would later recommend him to be the Philippine Secretary-General of the Social Watch Global Assembly where he coordinated and liaised with more than a hundred foreign delegates from over 70 countries from different parts of the world.

Both Professor Briones and he ran as nominees of Kaakbay Partylist in 2010 and 2013, but fate was not on their side. But, three years later, beyond their imagination, they would find themselves at the helm of the biggest and largest bureaucracy of the government.

At the start of the new administration – upon the recommendation of Secretary Briones, then newly appointed head of DepEd – President Rodrigo Roa Duterte appointed him Undersecretary of the Department of Education, where he now supervises three major serviceswith 8 divisions, one bureau with 3 divisions, and threeother major divisions. These offices are: the Administrative Service with the Asset Management, Cash, Records and general Services Divisions under it; the Disaster Risk Reduction and Management Service; the Information and Communications Technology Service with the Solutions Development, Technology Infrastructure, and User Support Divisions and the newly created Educational Technology Unit, under it; the Bureau of Learner Support Services with the School Health, School Sports, and Youth Formation Divisions under it; the Education Facilities Division, the Baguio Teachers Camp, and the Central Security and Safety Office in its operational aspect.

The School Building Program, Computerization Program, School-based Feeding Program, and Disaster-related Quick Response Program, which he handles through the services and divisions under his strand, already encompass more than 60% of the entire program funds of the Department of Education.

It is under his watch that the DepEd Administration Strand formulated the comprehensive Public Schools of the Future Framework with major programs such as the Digital Rise, the Public Education Network, DepEd Enterprise Resource Planning System, the Last Mile Schools, DepEd Core Values, Sports Manuals, and the Oplan Kalusugansa DepEd.

When the COVID-19 pandemic engulfed the nation and the whole world, he and the entire Administration Strand—in cooperation and coordination with other offices outside his strand—were able to handle the DepEd Task Force Covid-19, the DepEd Commons, DepEd TV, DepEd Radio, DepEd TV Facebook, DepEd TV YouTube Channel and the DepEd Learning Management System, among others. These undertakings earned DepEd the citation Policymaker EdTech Champion at the 10th Anniversary Event and Award Show of Mobiles for Education (mEducation) Alliance. Unknown to DepEd, the United States Agency for International Development (USAID) nominated it to the prestigious EdTech-centered non-government organization that is focused on the sustainable and evidence-driven role of technology in advancing quality education. In addition, DepEd TV was one of the Honorable Mentions under the Crisis and Conflict Response category at the same awards event.