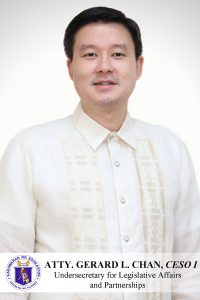 Atty. Chan was the Chief Privatization Officer (Executive Director V) of the Privatization and Management Office, an attached agency of the Department of Finance.  He formerly served as the Assistant Secretary for Procurement and the Director for Legal Service of the Department of Transportation. He holds the rank of CESO I, the highest rank in the Career Executive Service. He is also a Recognized Trainer in Procurement of the Government Procurement and Policy Board.