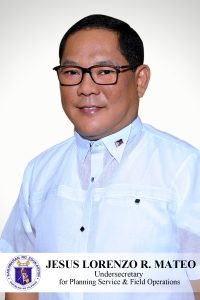 JESUS LORENZO RUIZ MATEO is currently the DepEd’s  Undersecretary for Planning, Human Resource and Organizational Development, and Field Operations. He provides the overall supervision of regional and field operations; guides strategic implementation of national policies; and exercises general supervision, direction, evaluation, and coordination of the operations and activities of the Planning Service.

Usec Jesse is service-driven public official with nearly three decades of public service under his belt and a solid background in policy formulation and analysis, planning and policy coordination, investment programming, project development and management, program monitoring and evaluation, technical writing, conceptualization and management of policies and programs focused on, but not limited to, upholding professional standards for teachers and promoting employee welfare and benefits.

He spearheaded the formulation of the Department policies on teacher hiring, performance-based bonus, and various employee welfare-related concerns, which strengthened professional standard and increased personnel productivity. He also acts as spokesperson of the Department.

Other highlights of his career includes: Chaired the United Nations Economic and Social Commission for Asia and the Pacific (UNESCAP) in the Fourth Session of the Committee for Social Development in Bangkok, Thailand; Assisted in the development and approval of the Executive Order “Institutionalization of the Philippines Qualifications Framework” and its Implementing Rules and Regulations; Provided guidance in the crafting of the Implementing Rules and Regulations of Republic Act 10647 “Ladderized Education Act of 2014”; Collaborated with DepEd colleagues and other education partners in the successful conceptualization and implementation of the Basic Education Sector Reform Agenda (BESRA); BESRA seeks to reengineer the basic education sector for the country to achieve the Education For All (EFA) objectives by 2015 and supports the attainment of the Millennium Development Goal (MDG) of universal primary education; Instrumental in securing the required government approval from the Investment Coordinating Committee for the implementation of the Australian Agency for International Development (AusAID), World Bank (WB), Government of Spain (GOS), UNICEF, and USAID-assisted projects;  Part of the two-man team to participate in the negotiation for the Japan International Cooperation Agency – assisted Projects on the Improvement of Educational Facilities Phase VI B in Tokyo; As TEEP Deputy Project Manager, the Project was able to justify to the Department of Budget and Management (DBM) the creation of positions for the Project Implementation Support Unit (PISU), secure the concurrence of JBIC on the technical assistance contract between DECS and INTEM-UPPAF Consortium, and assist in convincing the stakeholders to buy into the project particularly in mobilizing the local government units to support the school building component and in the preparation of the Division Education Development Plan of the 22 provinces; His efforts in forging teamwork between consultants and regular project personnel and between central and division implementers resulted in a dramatic turnaround of the project in terms of physical and financial targets in CY 2000; and as PDO III of EDPITAF, the division was able to source funds from the Asian Development Bank to finance the Environmental Education Study.   His involvement in the conceptualization of the Educational Facilities Improvement Project (EFIP) Phases I-V and negotiation with the Japan International Cooperation Agency (JICA) led to the partial modernization of the Records Management and Archives Office (RMAO).