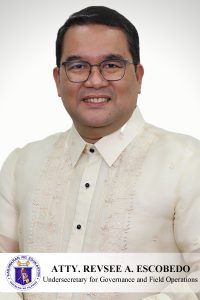 REVSEE ACUÑA ESCOBEDO is currently the Undersecretary for Governance and Field Operations. He supervises overall management on field operations in the Department of Education.

A lawyer by profession and a people person by heart, Usec Revsee Escobedo strongly upholds his principles and integrates these in his innate passion of serving the people, as rooted in his strong academic and civic background, and as translated in his specific plans of action.

Usec. Revsee was no stranger to public school education for he was an exemplary product of such. He graduated with honors in elementary and high school at the Gubat North Central School and Gubat National High School in Sorsogon. His early consciousness on public service has then started, drawing him closer to his true calling: working for the people and with the people.

A community-driven public servant, Usec Revsee actively immerses in public and political relations, community organization, project management, and field operations–all of which he has a keen interest in–as eminent in his significant years in government. Having served as a Political Affairs Officer (2002-2004), consultant (2013-2015), and Chief-of-Staff in the House of Representatives (2007-2010) and the Senate (2013-2014), to name a few, these designations concretely manifest his remarkable engagement in public service.

His innate interest and growing passion in public service eventually led him to pursue the legal profession. Apart from obtaining a degree in Industrial Engineering, he also pursued Legal Education, laudably took up Bachelor of Laws at the Arellano University School of Law in 2010. After he was admitted to the Philippine Bar in 2012, he then became part of the academe of the Polytechnic University of the Philippines as a law professor, University Legal Counsel, and later on as the University’s Board Secretary.

Being a lawyer and an academician paved his way to venture another side of public service: the Filipino youth. His utmost commitment was even amplified and exemplified as he dutifully took the challenge and the responsibility of the education sector. He served as Assistant Secretary for Procurement, Project Management, and Field Operations (2016-2018), and for Project Management, Bureau of Human Resources and Organizational Development, and Field Operations (2018-2019). He also served as the Officer-in-Charge of the Office of the Undersecretary, the same office he forefronts today, from February-December 2019.

An active face in the field, Usec Revsee dynamically collaborates and coordinates with various government and non-government agencies, relevant stakeholders, and policy-making bodies in fostering proactive delivery of quality educational programs, projects, and services in the field operations, human resources, and organizational development. Currently, he is an active delegate and participant, lecturer and convenor in policy and legislation, fiscal management, organizational development, and other pertinent fields, among others.