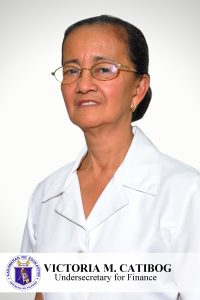 Victoria Medrana Catibog is currently an Undersecretary for Finance of the Department of Education in-charge of disbursements, accounting and personnel services.

Her work experience includes a 30-year stint (1975-2006) at the University of the Philippines (UP), rising from the ranks becoming UP System Budget Director in 1994. She also engaged in teaching at the same university for 22 years earning Professorial Lecturer status.In her administrative and academic capacities, she was invited to deliver lectures or serve as panellist in seminars and conferences in UP, other government agencies as well as by private sector entities.  She also served as Budget and Control Officer at the President’s Center for Special Studies on special detail from 1978 to 1979.  Before joining UP she worked in the Department of Education, Culture and Sports (DECS) from 1969 to 1975 in various capacities: as Personnel Clerk, Accounting Clerk and Chief Accountant of RO XI.Her experience before entering government was as an Accountant at the Ramon Magsaysay Award Foundation and private practice as external auditor and/or accountant of private businesses.

She engaged in consultancy as a Senior Public Financial Management (FM) Specialist at WB for various projects with the DepEd like TEEP (co-funded with JBIC), NPSBE, SEMP2, SPHERE (co-funded with AusAID), LEAPS and study on normative funding formula for school MOOE. Likewise, she was an AusAID FM Consultant for the DepEd study on equitable MOOE for schools, the CHED study on scholarships as well as the DBM PEGR. She was part of the team as FM Consultant for ADB on the TA for DepEd Decentralization.  She also served as Lead Research Consultant at PIDS-NEDA for “Conduct of Independent Validation for FY 2011 SBM Grants.”

She obtained her Bachelor of Science in Business Administration degree from UP in 1965, her MBA at the same university in 1981, and her Post Graduate Diploma in Advanced Financial Management at Delft Technical University in 1986 at The Netherlands.  She has also earned units in the masteral and doctoral programs in public administration of UP.