“Education is the most powerful weapon which you can use to change the world.”
– Nelson Mandela, South Africa President 1994-1999

In as much as education cannot be caged or taken away, we all have the right to have it.

I am Kenneth Macaldo Apatay, 25 years old, born on December 27, 1995. I was raised by my mother who was a manicurist at that time. I don’t have any solid memory of my father since he died when I was still young.

I will never forget May 25, 2015 because it was the day that I got busted by undercover cops. Unintentionally, I dragged my uncle in the mess even if he didn’t have any idea that I’ve been using illegal drugs. My conscience was killing me and I felt so bad about myself. I kept on asking, “Naging ganun na ba talaga ako ka-adik at kasama na kailangan ko pang humantong sa ganitong sitwasyon? In order for me not to influence others, did I really have to be isolated and caged?” I never imagined that I will be jailed. On June 15, 2015, I was committed to Davao City Jail. I was so depressed, hopeless. 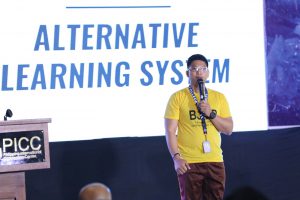 With nothing much to do inside the jail, I was able to reflect. I got closer to God and instead of crying over spilled milk, I started looking at my life from a different perspective. It is really true that in the midst of crisis, opportunity arises.

On my 3rd month of incarceration, the doors of the Alternative Learning System (ALS) of the Department of Education opened to us persons deprived of liberty (PDL). I saw this as an opportunity, a way to continue my education since I was in 3rd year high school when I was busted. Enrolling in ALS was my first step to becoming a better person.

I studied inside the jail for almost a year before taking the Accreditation and Equivalency exam. All our Instructional Managers were eager to teach us and they extended to us their time and patience every day – Monday to Friday – just to help us learn all the lessons. With perseverance, willingness to learn, and the help and support of the Instructional Managers and BJMP, almost all the PDL test takers passed the A&E exam. I also passed even though I was not feeling well because I had chicken pox on the day of the assessment. Upon passing the A&E exam, I finally received my high school diploma in August 2016.

With hard work and determination, I am happy to report today that I am in my last year in college, taking up Bachelor’s degree in Computer Technology major in Computer Programming. Indeed, learning is a lifelong process. Being incarcerated, I learned not just academic lessons but also life lessons.

The life lessons will remind me and stop me from becoming a recidivist or what is known in jail colloquially as “balik-bayan” — mga taong pabalik-balik sa bilangguan.

With the skills and competencies I learned in ALS, and now in college, I am preparing myself to be reintegrated in society. It will not be an easy journey because of the stigma that society placed on ex-PDLs.

But we all commit mistakes. And I am proof that if a person is given a second chance to reform; is helped so that he becomes a better person; and is supported so that he can pursue his dreams, an ex-PDL has tremendous potential to become a productive contributor to community and nation building.