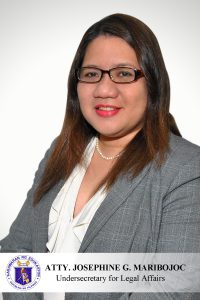 Atty. Josephine G. Maribojoc is the Undersecretary for Legal Affairs. She is primarily responsible in managing the legal concerns of the Department. She was the Director of Legal Service of the Department in 2015 where she managed, developed and built the capacity of the new Legal Service.

As she began her career at DepEd, some of her notable accomplishments are the following: formulated case strategy and theory as well as drafted and reviewed pleadings in the K to 12 constitutional cases against DepEd pending at the Supreme Court; rendered legal opinions to facilitate policy-formulation and address legal concerns of DepEd on various matters including Senior High School Program, procurement, Special Education Fund, intellectual property rights, employee benefits and child protection; reviewed various contracts and agreements relative to the education programs and requirements of DepEd; and evaluated and reviewed investigation reports, resolutions of complaints, decisions on administrative cases, and other legal compliance documents.

Among her professional background as a prominent lawyer are the following: As expert and consultant on Constitutional and Human Rights Lawto (Ret.) Chief Justice Reynato S. Puno, she rendered legal opinions, provided sources and performed substance editing for the book, Equal Dignity and Respect: The Substance of Equal Protection and Social Justice by (Ret.) Chief Justice Reynato S. Puno; Atty. Josephine G. Maribojoc, ed. (U.P. College of Law: 2012).  She also served as Court Attorney 6 in the Office of Chief Justice Justice Puno, the highest court attorney rank at the Supreme Court where she handled high-level constitutional law and human rights law cases with national and jurisprudential impact.

She was the former Executive Director of the Jesuit Volunteers Philippines Foundation, Inc., a service organization that sends volunteers aged 18 to 35 years to serve full-time for one to two years in under-resourced NGOs, schools, parishes and communities around the Philippines.   She became Associate Legal Counsel of the Dela Salle University Manila; and lawyer of Sycip Salazar Hernandez and Gatmaitan Law Offices in Makati City. She was also a lecturer and instructor of the Ateneo de Manila University and St. Scholatica’s College-Manila, respectively.

She is affiliated with the Integrated Bar of the Philippines, Jesuit Volunteers Philippines Foundation, Inc., and Order of the Purple Feather Honor Society, College of Law. She holds licenses both as a lawyer and as a professional teacher in secondary education.