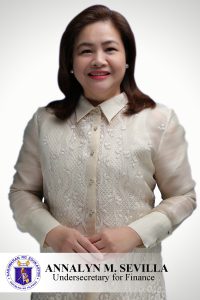 Undersecretary for Finance Annalyn M. Sevilla, advises and assists the Secretary of Education in the formulation, implementation and monitoring of DepEd’s finance services. Her responsibilities also include the operationalization of the Education Programs Delivery Unit (EPDU) which facilitates and coordinates the identification and resolution of bottlenecks and challenges of the DepEd’s delivery system. Undersecretary Sevilla is the Chairperson of the National Board of Trustees of the DepEd Provident Fund and is the Vice Chairperson for the National Book Development Board (NBDB). She is DepEd’s official representative to the National Commission for Culture and the Arts (NCCA), Girl Scouts of the Philippines (GSP) and the United Student Financial Assistance System for Tertiary Education (UniFAST) Board, as well as Board Member of the Palarong Pambansa. She is also one of the alternative spokespersons for the Department. Undersecretary Sevilla is a Gawad Dr. Pio Valenzuela awardee for the field of government service.

Undersecretary Sevilla has a wide experience in Public Financial Management, Governance and Change Management, having served as consultant for various organizations such as (1) Australian Aid, (2) USAID, (3) Millennium Challenge Account of the Philippines; and the (4) World Bank. Prior to becoming a consultant, she was a Senior Budget and Management Specialist at the DBM, wherein she served for ten years.

Undersecretary Sevilla also participated in the Executive Education Program for Public Financial Management at the Harvard Kennedy School of Government.