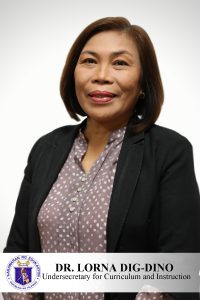 UNDERSECRETARY Lorna Dig – Dino, Ph.D. is a proud teacher by profession and passion. Her unwavering commitment to developing happy, nationalistic, and life-long Filipino learners, and mentoring compassionate and competent teachers towards excellence, have always been her primary thrusts, as she rose through the ranks at the Department of Education.

She started her 20-year journey with DepEd in 1997, after passing the Superintendents’ Exam (Educational Management Test), administered by the PRC, and Management Aptitude Test Battery (MATB), administered by the CES Board. She was, first, assigned as a part-time Classroom Teacher at Sorsogon National High School, and Assistant Legal Officer Designate at the DepEd Division of Sorsogon. Three months after, she was eventually tapped to become the Teacher-in-Charge of Biriran National High School, also in her home province of Sorsogon. For her, this was truly a more challenging task to fulfill because she needed to juggle two major responsibilities at once: be a Classroom Teacher and be a School Head. Worse, she had to deal with transforming this school situated in a far-flung community.

But despite these disheartening realities, this vital experience allowed her to see a positive, bigger picture of quality education –- that an effective learning environment needs: (1) child-motivating facilities,  (2) an innovative and student-centered teachers, (3) pro-active parents and community leaders, and (4)  a compassionate, creative, and teacher-caring school head.

With this vision, she conducted school-based in-service trainings, and initiated a more teacher-friendly supervision method for the teachers. As Cluster Head, she shared these with her fellow school heads to aid them with new strategies in running their respective schools. Soon after, she was awarded as the Outstanding Secondary School Head in the Division of Sorsogon. Then, she was assigned to be the OIC – Administrative Officer of Schools Division of Sorsogon.

Little did she know that she would use her experience as Teacher-In-Charge and Administrative Officer as leverages for fulfilling her eventual assignments. In June 2013, she was promoted to Education Supervisor and was later designated as the OIC – Assistant Schools Division Superintendent of Albay. She left Division of Albay as full-fledged ASDS in 2006 to go back to her home province and become the OIC – Schools Division Superintendent of DepEd Sorsogon.

Facing the challenge of transforming the quality of basic education of Sorsogon, Dr. Dino knew that she couldn’t do it alone. So, she started utilizing Education Summit to engage DepEd Sorsogon Supervisors, School Heads, and Staff. She also convened the Provincial, Municipal and Barangay Officials, Parent-Teacher Association Presidents, and LGU Edu  cation Committee Heads. She involved and empowered every stakeholder of Sorsogon’s educational system to actively initiate education-related projects that may encourage every Sorsoganon student to enjoy learning. And such move of transformational leadership had proven to have made a big difference in DepEd Sorsogon, particulary after the typhoon Milenyo that left the province with damaged school buildings.

After NEAP, she was given greater opportunities to share her expertise as a transformational leader, particularly as Regional Director of CALABARZON (2011 – 2013), Cagayan Valley (2014 – 2015) and MIMAROPA (2015 – 2017). She initiated a Function-Based Structure in the Regional Office of Region 4A. She also spearheaded the operationalization of NEAP CALABARZON and NEAP Cagayan Valley. Furthermore, she led the contextualization of Learning Materials in Indigenous Peoples Languages for MTB – MLE. Most importantly, she prioritized human resources development and collaborated with her team and other stakeholders to pursue excellence with compassion for others and the passion to realize the vision, mission and agreed goals.

As Assistant Secretary (2013 – 2015), she led the: (1) Development of the Non-DepEd Senior High School Policy Guidelines with the Senior High School Task Force and Field Officers, and (2) Development of the Training Design for the Grades 3 and 9 (K-12) Teachers with the Bureau of Elementary Education, Bureau of Secondary Education, and the National Educators Academy of the Philippines.

In August 2017, Dr. Lorna Dig-Dino was assigned as Officer-in-Charge for the Office of the Undersecretary for Curriculum and Instruction. Bringing in her philosophy of transformational leadership as she takes on this responsibility, she envisions a globally-competitive Filipino teaching force that would enable every Filipino child embrace the ideal of love for learning. And no matter how tough this challenge is, she is facing it with the Sorsoganon spirit of “Kasanggayahan” – having a mindset of peace and prosperity even when the going gets tough; and above all, the heart of a passionate teacher, who always cares for the welfare of his/her learners.

Concurrent with her responsibilities at DepEd, Undersecretary Dig-Dino is a Governing Board Member of  SEAMEO QITEP in Science and the current President of the Association of Department of Education Directors, Inc. She is also the founder of  ICare Batang Pinoy, Inc., organized with friends in 2012. Beyond being an educator, she takes pride in her role as a family woman to her husband, Butch, to her four children, and to her two grandchildren.