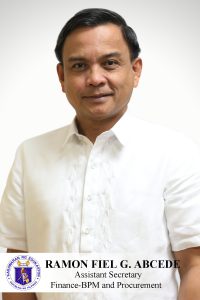 He worked with the Philippine Fisheries Development Authority as Corporate Accountant and later as Senior Management and Audit Analyst.

He started working in the Department of Education in 1987 as the Regional Accountant of DepED Region IV. After Region IV was divided in 2002, he was appointed as Financial and Management Officer II of the new DepED Region IV-B (MIMAROPA) and in 2010, as OIC- Office of the Assistant Regional Director of the same Region. From February 2013 to August 2013, he served in concurrent capacity as OIC-Schools Division Superintendent of Calapan City. A Career Executive Service (CES) eligible, and armed with leadership competencies he gained through relevant trainings and experiences, he became a full-fledged Director III on October 2012.

On September 2013, he was designated as OIC-Office of the Regional Director of DepED Region 5 where he got his full-fledged status as Director IV effective January 2014.

As he had done in his previous assignments, and during his stay in DepED Bicol, he implemented programs and projects that would install and/or improve organizational policies, systems and processes to support curriculum and instruction and thus ensure quality service to its clients, especially the teachers and learners.

He initiated the Personal Finance for Mentors (PerforM), a training program on financial education. Teachers and school leaders were given this intervention aiming to address the problem on their low net take-home pay. Integration of PerforM topics in relevant subjects of K to 12 curriculum is ongoing.

Last May 2018, through the support and team effort of all its officers and staff, Regional Office No. V got its coveted ISO 9001:2015 Certification.