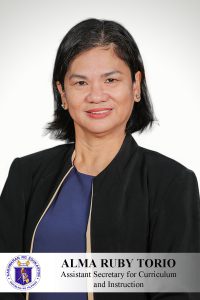 Her actions are her words.

ASec. Alma is a public servant whose idealism is rooted in the desire of developing learners to their maximum potential. She derives her energy from her unwavering dedication to her work which is manifested in her statement, “Our actions should speak more than our words.”
Her academic records reflect her stand on the importance of education. She finished her Bachelor of Arts (Psychology), Bachelor of Science in Commerce (Management), and her Professional units in Education in 1986. She completed her Master of Arts (Guidance and Counseling) in 1989 followed by her graduation of Doctor of Education in 1994. Her quest for multi-faceted capabilities pressed her to graduate her Master in National Security Administration in 2002 followed by her Bachelor of Laws in 2009.

Relentless to use her skills and talents in serving others, she started her career in the Department of Education as a Guidance Counselor in Pangasinan National High School in 1986-1990 and was subsequently promoted as an Education Supervisor I in Schools Division of Pangasinan I in 1990. Her journey continued as she eventually rose to the ranks to be the Regional Director of Region I. Evidently, ASec. Alma Torio has a diverse interest of learning as she was also commissioned as a Reserve Officer with the Rank of Lieutenant in the Philippine Air Force on August 16, 2002 while fulfilling her duties to the DepEd.